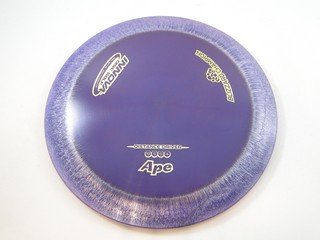 As a super-overstable high speed driver, the Ape isn’t made for everyone. Unless you can drive more than 400 feet, this won’t provide maximum distance for backhand shots.

Designed for ultra power throwers, headwind shots, and dogleg fades, The Ape lives up to its name. As a power driver, it is available only in the durable Champion plastic, in weights from 173-175 grams.

This disc is also available in lighter weights in the Blizzard Champion plastic between 130-159g. The lighter weight Blizzard Ape is built more for players who can’t throw with ape-like force. This is one of our best selling Blizzard plastic discs.

Shop for an Ape Here